GPS helps a guy keep track of his couch 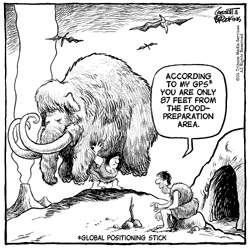 I'm a big fan of technology. Most guys are. This is why all important inventions were invented by guys.

For example, millions of years ago, there was no such thing as the wheel. One day, some primitive guys were watching their wives drag a dead mastodon to the food-preparation area. It was exhausting work; the guys were getting tired just WATCHING. Then they noticed some large, smooth, rounded boulders, and they had an idea: They could sit on the boulders and watch! This was the first in a series of breakthroughs that ultimately led to television.

So we see that there are vital reasons why guys are interested in technology, and why women should not give them a hard time about always wanting to have the ``latest gadget.'' And when I say ``women,'' I mean ``my wife.''

For example, as a guy, I feel I need a new computer every time a new model comes out, which is every 15 minutes. This baffles my wife, who has had the same computer since the Civil War and refuses to get a new one because -- get THIS for an excuse -- the one she has works fine. I try to explain that, when you get a new computer, you get exciting new features. My new computer has a truly fascinating feature: Whenever I try to turn it off, the following message, which I am not making up, appears on the screen:

Clearly, this message is not of human origin. Clearly, my new computer is receiving this message from space aliens. I don't understand all of it, but apparently there has been some kind of intergalactic problem that the aliens want to warn us about. What concerns me is the last sentence, because if the aliens are telling us that ``it may be possible to continue normally,'' they are clearly implying that it may NOT be possible to continue normally. In other words, the earth may be doomed, and the aliens have chosen ME to receive this message. If I can figure out exactly what they're saying, I might be able to save humanity!

Unfortunately, I don't have time, because I'm busy using my new GPS device. This is an extremely important gadget that every guy in the world needs. It receives signals from orbiting satellites, and somehow -- I suspect the ``cosine'' is involved -- it figures out exactly where on the earth you are. Let's say you're in the town of Arcola, Ill., but for some reason you do not realize this. You turn on your GPS, and, after pondering for a few minutes, it informs you that you are in ... Arcola, Ill.! My wife argues that it's easier to just ASK somebody, but of course you cannot do that, if you truly are a guy.

I became aware of how useful a GPS can be when I was on a plane trip with a literary rock band I belong to called the Rock Bottom Remainders, which has been hailed by critics as having one of the world's highest ratios of noise to talent. On this trip were two band members whom I will identify only as ``Roger'' and ``Steve,'' so that you will not know that they are actually Roger McGuinn, legendary co-founder of the Byrds; and Stephen King, legendary legend.

So I got a GPS for Christmas, and I spent the entire day sitting on a couch, putting it to good use. Like, I figured out exactly where our house is. My wife told me this was exciting news. I think she was being sarcastic, but I couldn't be sure, because I had to keep watching the GPS screen, in case our house moved. I also used my GPS to figure out exactly how far my couch is from LaGuardia airport (1,103 miles). There is NO END to the usefulness of this device! If you're a guy, you need to get one NOW, so you can locate yourself on the planet. While we still have one.

This article may not be copied without the expressed written consent of whoever I stole it from.